Gorman adds gravitas to BHS production of ‘Our Town’

In the hours before the curtain rises Friday night (Nov. 18) at the Helen Foley Theatre, eager Our Town cast members will be getting into character, getting into costumes and, with the help of makeup technicians, getting older – all except for the performer playing the pivotal role of the Stage Manager. The lines of age and the graying hair don’t have to be painted on Bill Gorman, the longtime Cider Mill Playhouse actor invited to join the Binghamton High School cast. Gorman first played the Stage Manager in the 1970s and gradually has grown into and refined his characterization, most recently performing the role about five years ago at the Cider Mill. He also directed a student production while a teacher at Vestal High School.

“In the ’70s, I did the ‘Jimmy Stewart version,” he said earlier his month, “but now I’ve found my own way.” That doesn’t mean, however, that he is dusting off his Cider Mill portrayal and bringing it, unaltered, to the BHS production. Some parts of an actor’s approach to a role can be developed only at rehearsal, interacting with other cast members, he explained. “You can’t do it in your head.” 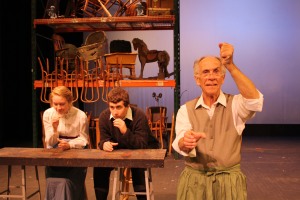 Pictured L. to R. are: Breanna Hoyt (Emily Webb), Nicholas Arnold (George Gibbs) and Bill Gorman (The Stage Manager) In a scene from the Serling Player’s production of OUR TOWN by Thornton Wilder at the Helen Foley Theatre running 11/18-20

Gorman wasn’t on duty for every Our Town rehearsal, of course. Some amount of, shall we say, grunt work had to be done first by the student actors. The preparation process, as described by director and BHS teacher Ariana Zbrzezny, was: Read the play through; give the big picture; block the kids before Gorman arrives and then “the nitpicking.”

Unlike Gorman, Zbrzezny has never acted in a production of Our Town, but she read it in class and has seen multiple productions and different interpretations. At the other end of the spectrum is student actor Esteban Doyle (Dr. Gibbs), who wasn’t familiar with play before auditions were announced and frankly admits doing a Google search of the play.

Doyle expressed his appreciation to Gorman, saying, “It’s cool to work with someone who is a professional.” Also cool, said the BHS junior who thinks of theater as a hobby, is “know(ing) that acting is something you can do when you’re old.”

Our Town is being presented by BHS’s Serling Players, but auditions were not restricted to students enrolled in Binghamton’s Rod Serling School of Fine Arts, said Larry Kassan, production designer and managing director. Kassan designed the Our Town set which includes not only the traditional bentwood chairs and ladders but rear projections and two tall storage racks holding various symbols of ordinary American life from a globe to a rocking horse to an old-fashioned clock.

Described by many as the “Great American Play,” Thornton Wilder’s drama  is about two ordinary families – the Gibbses and the Webbs — living ordinary lives in adjacent houses in sleepy Grover’s Corner, N.H.,  at the early part of the 20th century. Our Town and Samuel Beckett’s absurdist Waiting for Godot are Gorman’s favorite plays … and for the same reason. Although on the surface the two plays don’t seem similar, he said, both “treasure the value of friendship and the importance of little moments.”

Doyle said he “particularly likes the abstract nature of the play. Zbrzezny enjoys the breaking of the fourth wall so that “Bill gets to speak directly to the audience and to the actors.” The Stage Manage,r said Gorman, is a poet-philosopher.  He’s all-knowing but far more involved than a neutral narrator offering commentary. He has to have a certain forcefulness to move the production along; it’s his job to “efficiently tell the story. I have an agenda. It’s close to a morality play,” he said.

A typical Serling season includes a non-musical (either comedy or drama), a musical, a dance performance, vocal and instrumental concerts and a spring dessert cabaret. Zbrzezny and Kassan said the goal this year was to present a classic play, and once Our Town was on the table, Kassan said, he “wouldn’t consider using anyone but Bill.”

Actors Equity, the theatrical labor union, made accommodations with its guest artist contract, so that the professional actor would be allowed to perform in the high school production. Gorman, who obviously has been relishing his time working with the students, said, “If it were my decision, I would have volunteered.” He said he always loved working with the drama club in Vestal when he was a teacher and added that he was impressed by the discipline of the BHS actors.