The passing of artist Armondo Dellasanta 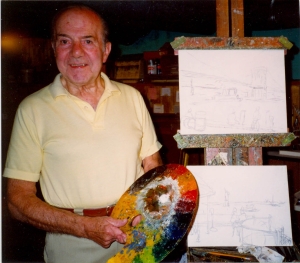 Dellasanta at his easel in 1998

It is with great sadness that we announce the passing of our beloved artist, Armondo Dellasanta, who died on Dec. 21, 2010 at the age of 94. He was a great friend who will be missed by family, his many friends and admirers. In his oil paintings, etchings and drawings, he captured the special places and history of Binghamton, New York City and Susquehanna, Pa., where he stood guard duty in 1941. He was deeply honored by the recognition he received during his lifetime, which included a star on Binghamton’s Walk of Fame and his Lifetime Achievement Award from our Broome County Arts Council. A very humble man, he nevertheless enjoyed watching his profile which aired frequently on public TV station WSKG in a program called “Expressions- – the Art and Soul of the Southern Tier.” He started to paint in the late 1950s and carried a sketch book with him in France during World War II.  As an infantryman, he fought in both France and Austria and received the Bronze Star. As an artist, he was influenced by the “Ashcan School” whose artists painted scenes of everyday life.  He developed his own unique Impressionistic style over the years and was referred to by admirers as “Binghamton’s Van Gogh” and an “urban Monet.” He was especially grateful and remembered all those who supported his work. In a private service, held on Dec. 27, 2010, he was remembered for his great love of family and friends, his integrity, his beautiful art work and his service to his country. The Rev. David C. Seaver, Chaplain at Lourdes Hospital, conducted the service, recounting a story from Del’s childhood that summarized his rise from humble beginnings.  Armondo Dellasanta was buried with full military honors in recognition of his service in World War II.

Please share your thoughts, memories and tributes to Armondo Dellasanta, his art and his creative legacy.

3 Responses to “The passing of artist Armondo Dellasanta”