Solo or part of a troupe, onstage or behind the scenes, paid or volunteer, each of the five 2010 Heart of the Arts Award nominees gives 100 percent to the bright and varied world of arts and entertainment in Broome County. All this week BAMirror will be providing biographical background about the nominees. We’re also offering you an opportunity to congratulate the nominees and to share a story or two. Today we feature Pam Ondrusek, president of the board of S.R.O. Productions III.

NOTE TO BCAC MEMBERS: Your HOTA Ballot must be in by 5 p.m. Sept. 7.  The three HOTA award recipients and this year’s Lifetime Achievement Award honoree will be announced on Oct. 1. They will receive their awards during the Heart of the Arts Awards Celebration Oct. 8 in the Recital Hall of The Forum in Binghamton. 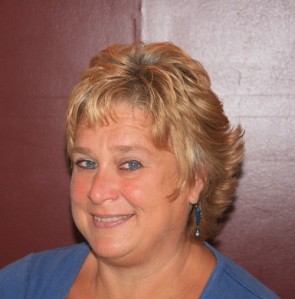 The mission of S.R.O. Productions III, a not-for-profit community theater company, is to entertain, educate and enrich the Greater Binghamton area through community involvement in the performing arts, and Pam Ondrusek, who has been part of the troupe since the early 1980s, could be the “poster child” for that involvement. The Binghamton native’s involvement in theater started when Michele Tully, founding member of S.R..O and the Maine-Endwell theater program, asked Pam to make a costume for Maine Endwell High School’s first theatrical production, “Godspell.” She delivered the costume to a rehearsal and immediately was hooked by the process of putting on a show. She volunteered for S.R..O shortly thereafter and became involved in many different aspects of production.

In the early 1990s, Pam was asked to join the S.R.O. board. She held the position of treasurer and was then elected president. Pam is a behind-the-scenes person who has been producer, fund raiser, set painter and house and box office manager for most of S.R.O.’s shows. When asked about her role in the company, she calls herself an organizer and general encourager of all the talented performers within S.R.O.

In addition to S.R.O. she has helped other troupes in the area including Jan DeAngelo & Company, The Dance Connection, Know Theatre and several high school drama groups. Her selfless commitment and numerous hours of involvement have been an integral part of providing people in this area with the opportunity to perform in and see high-quality entertainment. Pam also runs the volunteer usher program for the Broadway Theatre League at The Forum, which affords high school students the opportunity to see Broadway-quality productions.

Pam’s fulltime day job is in Human Resources and Administration at JCPenney’s in the Oakdale Mall. She is honored to receive this nomination and wishes to thank the late Michele Tully for involving her in the joy of theater so many years ago.

If you wish to offer your congratulations or tell your best Pam story, please comment here.

One Response to “Profile: 2010 Heart of the Arts Award nominee Pam Ondrusek”